On January 20, when Donald Trump takes office, the 2017 Edition add-on for the game Power & Revolution: Geopolitical Simulator 4 will be released

Try out the political agenda of the new US President: Will it be viable?

Engage in conflicts mapped-out for 2017:
Will this year see the end of conflict in Syria and Iraq? 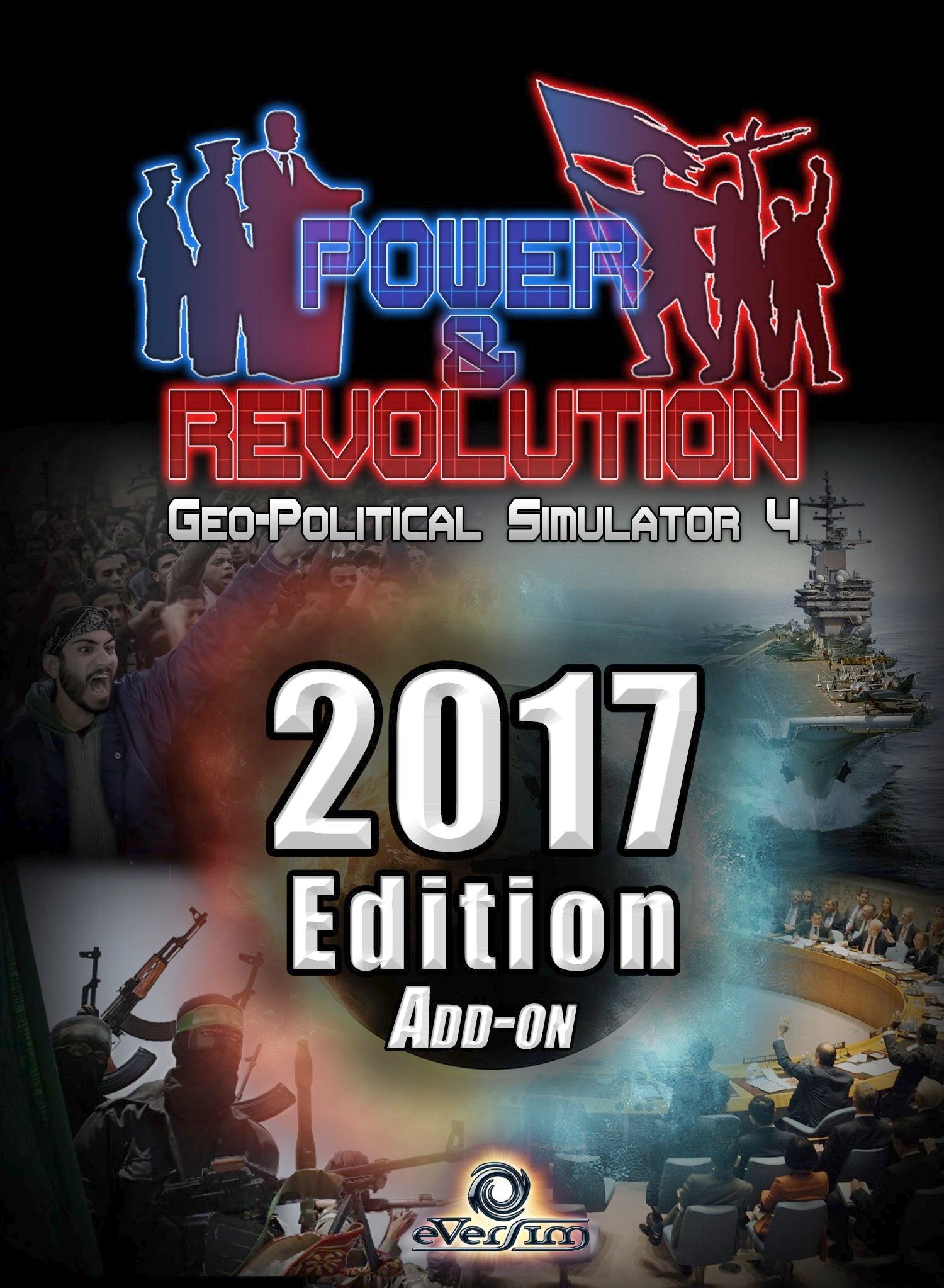 This add-on contains facts and figures updated as of January 1st, 2017 with new features and new scenarios especially for 2017:

- Donald Trump’s Challenge : play as the new chief executive of the United States and strive to keep your campaign promises on issues such as reducing the tax burden, stimulating the economy or the fight against illegal immigration... all while avoiding bankrupting the nation and maintaining your approval ratings with the end goal of being reelected for a second term in 2020.

- War in Syria and Iraq 2017 : play as one or several warring factions in the new conflict map configuration updated as of the beginning of 2017 and strive to emerge victorious or put an end to hostilities. NB : the conflict scenarios from the beginning of 2016 will still be playable

- Gross National Happiness : improve the quality of life for your people by implementing reforms and try to  raise your country’s global ranking.

- French Election 2017 : play as one of the candidates in the French national elections or even the current chief of state and run a campaign, manage your budget, establish your campaign platform, participate in debates and try to get elected (or reelected) to the highest office.

This is the fourth installment of the Geopolitical Simulator series, released in Spring 2016. The game is available for PC and MAC and distributed in digital from its official website and on several e-store (Amazon, Appstore, Steam,...)

Power & Revolution, Geopolitical Simulator 4, is a simulation of our current world, recreating its features in-depth and across a number of domains: economic, political, military, social, financial, environmental, energetic, transportation...

All countries of the world are represented with their own features. The calculation and scenario engines include more than 100,000 data, 15,000 texts and 10 hours of recorded dialogue. A detailed and animated 3D world map helps to support the players, with all the borders, regions and important and strategic locations of the world.

Players can opt for the management of just one country or several simultaneously and design collaborative strategies to change the world's destiny. There are game settings across multiple domains: degree of activity of terrorist organizations, probabilities of natural disasters, reactivity of populations, outbreak of wars. More than twenty contextual scenarios with current events from today's world are integrated.
Players can choose to play as a head of state or as a leader of the political opposition.

Links
Description of the 2017 Edition add-on : www.power-and-revolution.com/buy_p17.php
Description of the game Power & Revolution : www.power-and-revolution.com/presentation.php
Game Trailer: www.youtube.com/watch?v=db6YDRhBarc
Press kit: www.power-and-revolution.com/press/get_files_press.php
Password: press_pass
Geo-political Simulator project history, and its creators
In development since 2004, Geopolitical Simulator, a.k.a. G.P.S., strives to be ambitious and one of a kind, constantly evolving, with a team of dedicated specialists and developers. Its objective is to offer a simulation of today's world whose comprehensiveness is constantly being improved—notably with data that is regularly updated—and to develop new scenarios that reflect world events and geopolitical upheavals.

G.P.S. is a software from the French company Eversim, a company specialized in the development of network simulation games in a persistent world. This company was founded in February 2004 by André and Louis-Marie Rocques the former heads of the independent video game dev studio Silmarils, which launched more than 30 games between 1987 and 2003.

For further information, you can look at their website: www.eversim.com/ns/en/videogames_silmarils.php
The simulation tools developed by Eversim are also used as serious gaming by several organizations (NATO for example) as a training and teaching tool for politics and diplomacy, as well as for simulating crisis situations.

Below is a video that shows a special version of GPS being used by NATO for training future diplomats, within a simulation session of a geopolitical crisis. www.youtube.com/watch?v=D84Z_BCUtkg