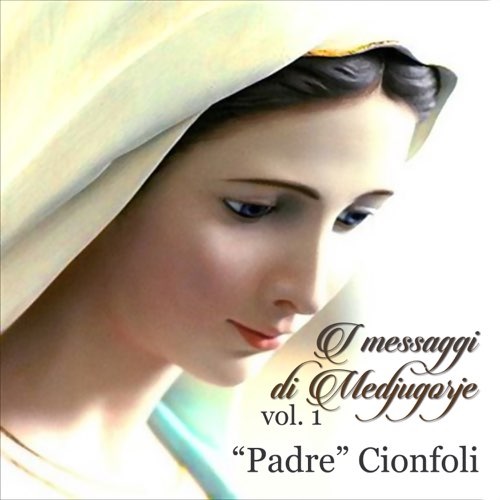 "Medjugorje Project" is a record work to celebrate the thirtieth anniversary of the apparitions in Medjugorje. There are thirty songs with the original texts taken from the messages of the Madonna.

The lyrics of the songs are assembled by reducing the messages of a year (on the 25th day of each month) into a song, plus some small additions of personal messages to the various visionaries of Medjugorje. They are three music CDs with 10 songs each, for a period of thirty years...

The Queen of Peace be with us!
Giuseppe Cionfoli, aka Padre Cionfoli

Giuseppe "Father" Cionfoli is a "songwriter of God" by vocation. Wearing his friar's habit, he was chosen in 1981 by the television show "Domenica in" to participate in a competition of new voices. The song performed was "Nella goccia entra il mare" which spoke of the concrete experience that the Christian makes of God when he allows him to enter his own small drop of himself letting himself be filled.

Cionfoli's success was immediate, so much so that he was called the "Minstrel of God". Participation in the Sanremo Festival, 1982 edition, was a must, with "Solo Grazie": a song to life. Of that edition of the Sanremo festival "Father" Cionfoli was the moral winner, so much so that in a short time "Solo Grazie" arrived at the top of the charts of the best-selling records in Italy and in the world.

Cionfoli in that period devoted a lot of space to preaching, participating in meetings for young people and prayer-meetings organized by parishes, dioceses or groups of Catholic inspiration for charity purposes. There are also numerous tours abroad (Canada, Australia, the United States and Europe). One of the most exciting experiences of that year was the concert held in the Bari stadium, which was also attended by Mother Teresa of Calcutta.

In 1983 he participated in his second Sanremo festival with the song "Shalom", invoking peace. Also to be remembered: his participation in the Sanremo 1994 festival with "Squadra Italia" (in a song on the fundamental values of the family) and his passion for art with the creation of paintings and sculptures inspired by Padre Pio.

Witnesses of his works were Federico Fellini, Alberto Sordi and Mike Bongiorno. Some sculptures are exhibited in various Italian cities.