2017 Results : AKKA exceeds its targets for the fourth consecutive year

Maurice Ricci, CEO of AKKA, commented,
“2017 saw the acceleration of our international development and the strengthening of our digital offer. Backed by our leadership in the European mobility sector, we are embarking on a new phase, with the organisation of the Group around a single brand, AKKA, the launch of our international university, The AKKADEMY, to increase our attractiveness as an employer, and further strategic acquisitions to accelerate our geographical diversification and expand our client portfolio. All of these initiatives come together to form our new strategic plan, CLEAR 2022, so that we can harness the growth offered by the digital revolution and double our size in the next five years.”

CLEAR 2022 :
- Launch of our strategic plan
- Doubling in size by 2022
- Single brand strategy to accelerate synergies
2017 RESULTS
At its meeting of 20 March 2018, the Board of Directors of the AKKA Technologies Group closed the accounts for the 2017 financial year.

2017 KEY FIGURES: RECORD GROWTH AND PERFORMANCE
- AKKA Technologies’ revenue stood at €1,334.4 million in 2017, up 19%. The Group has shown sustained organic growth throughout the year. Its strong foundations in mobility have enabled it to increase its organic growth to 7.0%, compared to 5.5% in 2016. Organic growth was strong in each of the Group’s three business units in 2017, at 8.4% in France, 4.1% in Germany and 9.1% internationally.
- The operating profit from ordinary activities of the three Business Units France, Germany and International leapt by 26% in 2017 to €109.3 million (compared to €86.4 million in 2016). This performance is due to the continued growth in margins in France and the beginnings of an improvement in performance in Germany, linked to the early effects of the transformation under way. With the BU Others bearing some of the investment relating to the launch of CLEAR 2022, the operating margin from ordinary activities has increased by 30 bps to 7.2%.
- Non-recurring expenses came to €20.2 million. These relate to the setting up of the Management Incentive Program (€6.2 million), the acceleration of the transformation of the Germany BU and investments in preparation for CLEAR 2022. Operating profit amounted to €75.3 million (up 76%).
- Consolidated net profit grew by 161% to €44.1 million. It represents 3.3% of revenue, compared to 1.5% in 2016.
- Self-financing capacity came to €91 million for the year, a 37% increase compared to 2016. Client payment time improved slightly by one day in 2017, to 53 days. Operating cash flow was €69 million.
- Net debt is under control. After payment of dividends and acquisitions, it stood at €195 million as at 31 December 2017, which corresponds to a gearing ratio of 73%. Following the success of the €450 million Schuldschein issue in late 2017, the Group’s free cash flow amounted to €431 million. Its strong cash generating capacity, €200 million revolving credit facility and NEU CP  programme allow the Group to implement CLEAR 2022 in line with its financial balances.
- The strong recruitment momentum resulted in a 17% increase in the Group’s workforce in 2017. As at 31 December 2017, the Group had 15,515 employees (compared to 13,252 at the end of 2016), with 6,996 in France, 4,734 in Germany and 3,785 internationally.
2017 RESULTS BY REGION: A STRONGER GEOGRAPHICAL BALANCE
- With sales of €551.7 million, France recorded excellent economic growth of 9.2% for the whole of 2017. The acceleration observed during the first nine months of the year increased in Q4. In a dynamic environment, AKKA accelerated its market share gains in the Digital technologies sector. This acceleration was sustained by a strong recruitment momentum. The French business recorded an operating margin from ordinary activities of 8.1% in 2017, compared to 7.1% in 2016. Including recurring subsidies, the margin comes to 10.7%. In 2018, the French business is expected to benefit from continued demand from the automotive, aerospace, rail and life sciences sectors and from the recruitment momentum.
- Germany achieved revenue of €486.2 million, up 25.7% for the whole of 2017. Economic growth amounted to 5.6% for the period, continuing at the pace set in the first nine months of 2017. The acquisitions of Erlkönig in 2016 and GIGATRONIK in 2017 strengthened AKKA’s position in the Digital sector while accelerating its geographical diversification and expanding its client portfolio. 2017 confirmed that the group is seen as an essential player by German OEMs. Operating profit from ordinary activities leapt by 47% to €37.0 million (compared to €25.2 million in 2016). The operating margin from ordinary activities thus increased by 110 bps to 7.6%, underlining the early positive effects of the transformation under way in Germany.
- The Group’s international activities (excluding Germany) recorded revenue of €296.4 million in 2017, up 30.7%. Economic growth is close to 10% and further acceleration was observed in the fourth quarter (+14.7%). This momentum was driven by the excellent performance of the Life Sciences business. AKKA has reached a critical size in Belgium, Italy, Spain and the Czech Republic. The Group has accelerated its investments to sustain its growth in these countries and reach a critical size in its other European bases. International activities recorded a 10% increase in operating profit from ordinary activities to €27.6 million in 2017, despite these investments and the temporary diluting impact of the Oil & Gas business.

2018 PROSPECTS AND DIVIDENDS
- 2018: Combined with the increase in the number of digital technologies projects, the strong momentum in sales and recruitment seen in 2017 continued in the first quarter of 2018, indicating sound growth and further margin improvements for 2018.
- Dividend: at its meeting of 20 March 2018, the Board of Directors of AKKA Technologies decided to propose to the upcoming General Shareholders Meeting of 19 June 2018 the payment of a dividend of €0.70 per share (increased +17% from the dividend paid in 2017 for 2016).
CLEAR STRATEGIC PLAN: A ROAD MAP FOR HARNESSING GROWTH
- A single brand to accelerate synergies and increase the visibility and clarity of its offer: the Group has chosen to adopt a single brand, bringing all of its expertise and sectoral activities in every country under the same banner. This new brand will boost the Group’s attractiveness to win and retain the clients and talent that will be at the heart of its growth. 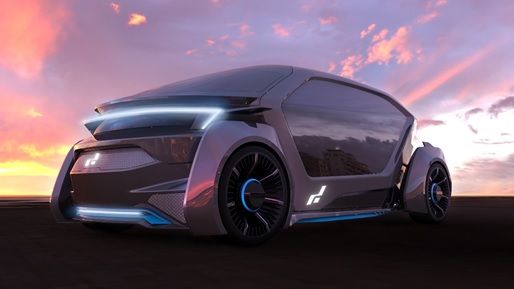 Iconiq Model L5
- Opening of The AKKADEMY: to increase its attractiveness and support its international development, AKKA has opened an in-house university, The AKKADEMY, which will train talent from all over the world each year and create a community of alumni to promote cohesion and cross-sectoral careers within the Group. The aim is to support digital natives to embark on an international journey through the projects launched by AKKA’s clients.
- CLEAR 2022 - With the engineering and R&D services market set to double in size to 266 billion euros by 2022 , AKKA is using these actions as the foundation for the launch of its new strategic plan, CLEAR 2022, which is structured around five priorities: Customer-focused, Leadership in innovation, Excellence in delivery, Attractive for talents, Results-oriented. The plan will enable a lasting improvement in the company’s financial performance by 2022:
• Revenue of €2.5 billion.
• Operating profit from ordinary activities of €250 million .
• Free Cash Flow of €150 million.
- Commenting on the 2017 results and growth prospects, AKKA Group Managing Director Nicolas Valtille said:
"AKKA has exceeded its revenue and margins objectives for the fourth consecutive year, demonstrating its ability to grow more quickly than the technology consulting sector. These results, which exceeded the objectives set out in our PACT17 plan, show that the initiatives undertaken - the Transformation Plan, accelerating our growth in Germany, and strategic acquisitions in the digital sector - are bearing fruit and will fuel the implementation of CLEAR 2022. Continuing with this dynamic, we will see growth of more than 5% in 2018, as well as an improvement in our margins and Free Cash Flow."
Upcoming events:
Publication of revenue for the first quarter of 2018: Thursday, 26 April 2018
Publication of revenue for the second quarter of 2018: Thursday, 26 July 2018
About AKKA Technologies 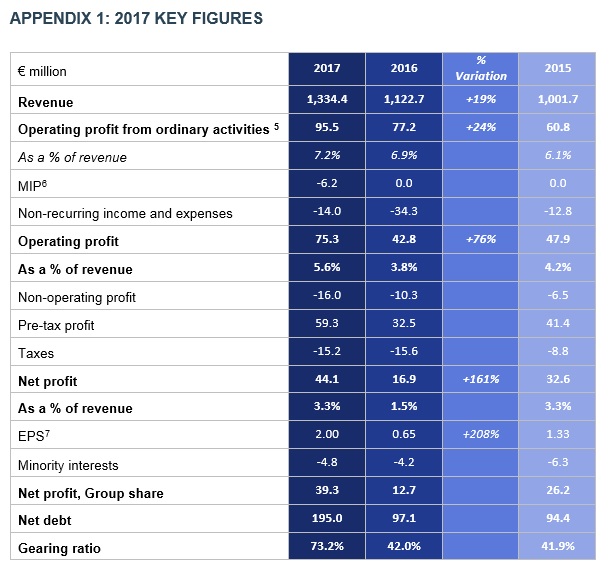 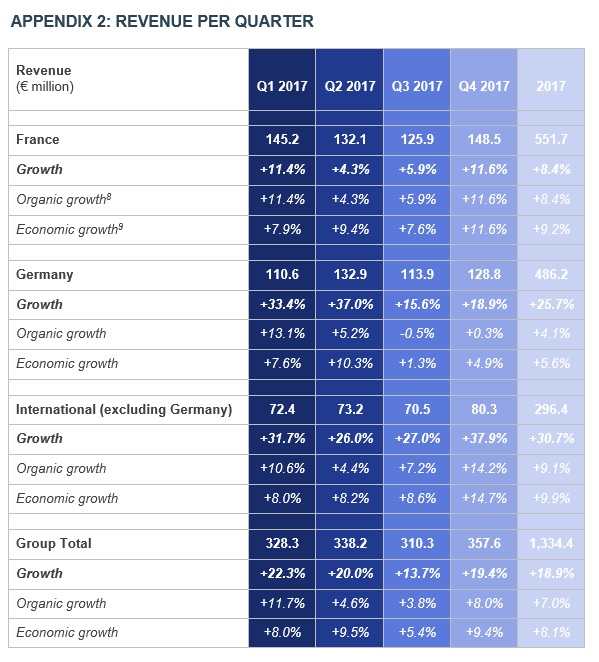 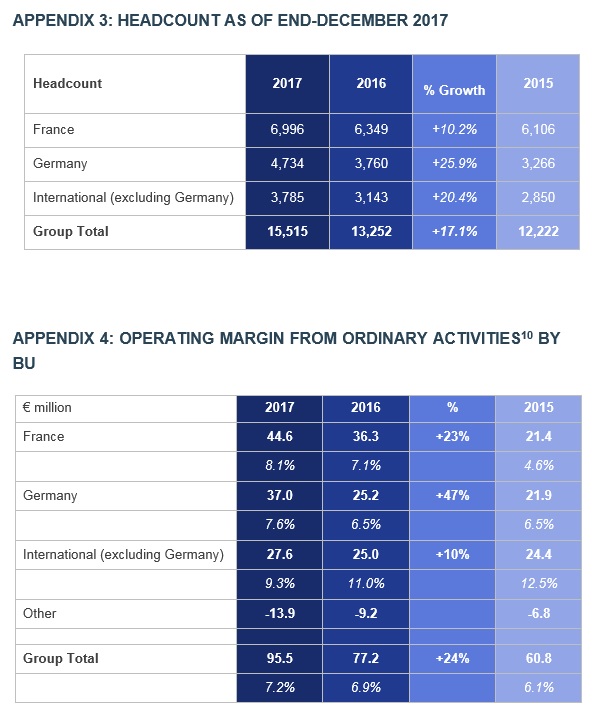