Interim revenue up 21% at €666.5m
Excellent momentum in France, Germany and International
Strong organic growth: +8.1% in H1 2017
Faster pace of the rollout of the digital offering compounded by Gigatronik 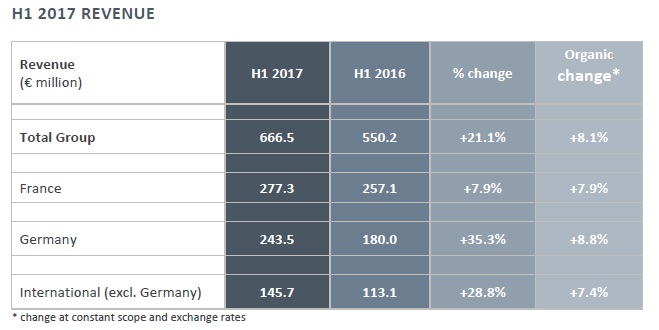 AKKA Technologies enjoyed an excellent first half, with the strong economic growth momentum seen early in the year accelerating in the second quarter (Q2).

(1) Economic growth: organic growth adjusted for change in the number of working days.

Organic growth momentum was strong in each of the Group’s three business units in the first half: +7.9% in France, +8.8% in Germany and +7.4% in International.

With revenue of €277.3 million, France delivered stellar economic growth of 8.7% over the first half. The acceleration in the pace of growth in the first quarter was amplified in Q2. It was 9.4% in Q2, after 7.9% in Q1. In a dynamic environment, AKKA Technologies has stepped up the pace of its market share gains thanks to its positioning in the mobility sector and the digital technology and embedded computing businesses. Growth in French operations benefited from growth in the automotive, aerospace, rail and life sciences sectors. A persistently high level of recruitment offers the prospect of further strong growth over the full year.

In Germany, revenue increased by 35.3% to €243.5 million in H1 2017. Economic growth was 8.6% (7.6% in Q1 and 10.3% in Q2). The second-quarter performance is particularly noteworthy in view of the demanding comparison base after organic growth of 23.0% in Q2 2016. The acquisitions of Erlkönig in 2016 and Gigatronik in 2017 have strengthened AKKA’s positioning in digital technology, while increasing the diversification of its geographic footprint and customer base. Q2 confirmed that the AKKA Technologies Group is now a key player with German OEM ecosystem. In a very competitive environment, growth in the second quarter was fuelled chiefly by Airbus Group, Audi, BMW, Bosch, Continental, Porsche and VW.

The Group’s international operations (excluding Germany) posted revenue of €145.7 million in H1 2017, an increase of 28.8% compared with H1 2016. Economic growth was a sustained 8.0% despite the contraction in the Oil & Gas business Economic growth momentum remained strong. It was 8.2% in Q2, after 8.0% in Q1. Over the first half as a whole, economic growth excluding Oil & Gas was 12.4%. Growth in H1 was driven chiefly by North America, Asia, Eastern Europe, Italy and the United Kingdom. Belgium reported economic growth of 6.7%, above that of the first quarter (+1.2%). AKKA Technologies has reached critical mass in Belgium, Italy, Spain and the Czech Republic. The Group is stepping up its investments to sustain its growth in these countries and to reach critical mass in its other host countries.

AKKA Technologies has strengthened its value-added expertise and its European base with significant and structuring acquisitions.

The acquisitions of CTP System and Edelway in Q1 cement AKKA’s strategy of moving up the value chain with the aim of developing a high-potential international life sciences business. AKKA has become a close partner for the world’s top 10 healthcare companies. The organic growth of more than 9% recorded by the life sciences business during the first half illustrates its growth potential. CTP System and Edelway also strengthen the Group’s international diversification in Italy, Switzerland and Spain.

In the space of two years, AKKA Technologies has become a leader in digital technologies. In 2015, AKKA grouped together the full range of its digital expertise in France. At the same time, AKKA has made three successive strategic acquisitions in Germany. Auronik, at the end of 2014, reinforced the Group’s positioning in infotainment and eMobility. In 2016, Erlkönig subsequently strengthened the offering in digital strategy consulting, infotainment and mobility. Lastly, the acquisition of Gigatronik, finalised in early 2017, reinforces AKKA Technologies’ leadership in digital technologies. These acquisitions have given AKKA unique positioning to meet the challenges represented by the Internet of Things, the autonomous mobility and the man-machine interface for industry. Gigatronik will accelerate the Group’s transformation in digital technologies and the technologies of the future, with the deployment of the full range of its expertise across all sectors and geographies.

AKKA promotes the excellence of its teams to accelerate its organic growth.

Implementation of a Management Incentive Program: to accompany its future growth, AKKA Technologies is launching an incentive compensation scheme based on the company’s performance. Strong growth in recent years has enabled the Group to exceed €1 billion in revenue and double its workforce, bringing it close to 15,000 experts. This co-investment mechanism will allow AKKA Technologies to renew an initiative dating back to 2008, which, in a similar context, enabled it to strengthen the sense of belonging and cohesion within the Group, and generated strong organic growth.

The excellent first-half performance allows the Group to raise its 2017 growth targets: the Group is now anticipating organic* revenue growth above 5% in 2017, combined with a further improvement in margins.
The successful completion of the transformation in France, the diversification in Germany and the maintenance of high margins internationally will enable the Group to exceed its 2018 revenue targets and deliver an operating margin from ordinary activities of between 8% and 10%.**
Beyond then, AKKA Technologies aims to continue its rapid growth over the coming years in order to round out its unique position as a global player in technology solutions for industry.
* at constant scope, exchange rates and working days
** margin based on operating profit from ordinary activities is calculated before non-recurring items and expenses relating to stock options and free shares 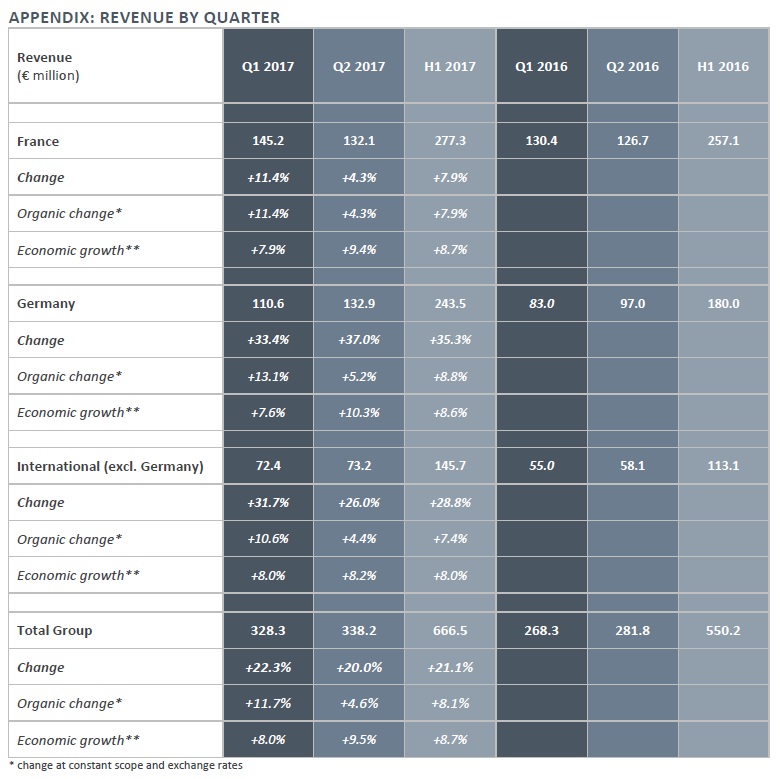