At its meeting of 21 March 2017, the Board of Directors of AKKA Technologies approved the financial statements for the year ended 31 December 2016. The accounts have been audited, and an unqualified certification report was issued on the same date.


Maurice Ricci, Chairman and CEO of the Group, said: “I am very pleased with our achievements in 2016. We improved the Group’s operating performance. But above all, 2016 was marked by the successful transformation of the France business unit, the strong momentum of the German pillar and the shift in the Group’s offerings and positioning towards digital technology. We thus strengthened AKKA Life Sciences’ positioning as a close partner for the world’s top 10 healthcare companies, while also securing the acquisition of GIGATRONIK. Combined with the acquisition of Erlkönig, GIGATRONIK rounds out our expansion in Germany, accelerates our customer diversification and reinforces our technological expertise in the automotive segments of tomorrow.

Our successes in 2016 pave the way for the future. Our strong sales momentum and accelerated recruitment back up our 2018 targets and prepare us for the next stages in our development.”

- AKKA Technologies’ revenue amounted to €1,122.7 million in 2016, an increase of 12%. In line with the objectives communicated to the market early in 2016, each of the Group’s three business units (BU) posted positive organic growth over the full year. The Group’s firm footing in mobility enabled it to lift its organic growth to 5.5% from 3.1% in 2015. Targeted acquisitions have strengthened its technological skills in the automotive sector and accelerated its diversification in the life sciences sector.

- The Group’s three business units posted operating profit from ordinary activities of €86.4 million, up 28% from €67.7 million in 2015. This very satisfactory performance was achieved thanks to the success of the transformation of the France BU, the swift recovery of Matis, the improvement of the Germany BU’s performance and the quality of International margins, which were above 10%. Operating profit from ordinary activities increased by 27% to €77.2 million. The operating margin firmed to 6.9% (6.1% in 2015).

- Operating income amounted to €42.8 million. It reflects the impact of non-recurring expenses relating chiefly to the accrual of €24 million on the research tax credit (crédit impôt-recherche - CIR). This accrual will not affect the Group’s operating performance in coming years, and has no impact on its cash position. Moreover, operating cash flow nearly doubled year on year.

- Operating cash flow amounted to €72.5 million in 2016, an increase of 84% compared with 2015. This good performance helped finance the year’s acquisitions and capex, and confirms the Group’s ability to self-finance its growth.

- Net debt benefited from the strong cash generation. They amounted to €97 million as of 31 December 2016. The Group has a sound balance sheet, with gearing under control at 42% and cash and cash equivalents of €159 million. Its strong capacity to generate cash, the €200 million revolving credit facility and the recent implementation of a NEU CP* programme give the Group the ability to pursue its policy of targeted acquisitions.


2016 RESULTS BY GEOGRAPHY
- France reported revenue of €509.1 million in 2016, an increase of 8.3%, with organic growth of 2.8%. This growth was achieved thanks to momentum in the automotive sector and the resumption of growth in the rail sector. The Group’s diversification capacity allowed it to stabilise its business with the aerospace sector despite the decline in demand from Airbus. The successful transformation of the France business unit translated into a 70% increase in operating profit from ordinary activities to €36.3 million in 2016, a margin of 7.1%. Including subsidies received in France, the margin comes to 9.9%, in line with industry standards. The good sales momentum and the acceleration of recruitments since the second half of 2016 offer the prospect of faster organic growth in 2017 than in 2016 for the France BU, with a further improvement in margins.

- Revenue in Germany increased by 14.8% to €386.8 million in 2016, with organic growth of 10.9%. Strong growth was recorded with the vast majority of customers. The Group recorded sustained business growth with Daimler and double-digit growth with Audi, BMW, Bosch and Porsche. The business unit’s operating profit from ordinary activities increased by more than 15% to €25.2 million, a margin of 6.5%. Our performance and our actions prepare the future. The new regional split between three major industrial basins (Northern, Southwest and Southeast Germany) in the second quarter of 2016, together with the acquisitions of Auronik, Erlkönig and GIGATRONIK, will strengthen the business unit’s agility, proximity to customers and its expertise in the technologies of the future. As was done in France, strong momentum in recruitment and the success of this transformation will favour the business unit’s diversification and the gradual improvement of its margins.

- In 2016, international operations (excluding Germany) recorded a 16.5% increase in revenue, with organic growth of 2.7% to €226.8 million. The temporary downturn was attributable to the decline in the Oil & Gas business, a demanding comparison base and the discontinuation of Matis’s loss-making businesses. Growth in international operations excluding Matis and Oil & Gas amounted to 8.6% over the full year. This strong growth allowed the Group for the first time in its history to cross the threshold of 3,000 international employees, and to reach critical mass in four geographies, Benelux, Italy, Spain and the Czech Republic. The business unit’s operating income amounted to €25.0 million. The operating margin from ordinary activities was 11%, despite the unfavourable environment in Oil & Gas. The Group’s continued diversification and the creation of a unique Life Sciences division will drive the business unit’s growth and margins in the medium term.

The Group has accelerated its targeted acquisition strategy since 2015, building up its German pillar and strengthening its European positioning.

Ramp-up of skills in the technologies of the future: AKKA Technologies completed the acquisition of GIGATRONIK on 3 March. This acquisition is subject to the approval of the German competition authorities. GIGATRONIK, together with the recent acquisitions of Erlkönig, the Bertone brand and Auronik, completed at the end of 2014, reinforces the AKKA Group’s technological expertise and high value-added positioning in the automotive segments of tomorrow: hybrid platforms, connected objects, the Internet of Things, mobility, autonomous driving and embedded computing. GIGATRONIK will also allow AKKA Technologies to accelerate its expansion in Germany, among major automakers and suppliers including Audi, BMW, Daimler, Ford, Porsche and Volkswagen.

Growth in Life Sciences: the Group has furthered its move up the value-added chain while developing its technological offerings and increasing its geographic diversification and customer portfolio in the Life Sciences. The acquisitions of CTP System and Edelway will enable it to roll out its know-how internationally to the top 10 global healthcare companies in the fields of process engineering, equipment, general facilities, regulatory affairs, quality assurance and project management.

Implementation of a NEU CP programme1 : in the first quarter of 2017, AKKA Technologies successfully implemented a €200 million NEU CP. After the establishment on 1 July 2016 of a new five-year €200 million revolving credit facility on very attractive terms, the Group continues to show its drive and creativity. These new funding reinforce its war chest while reducing its financing costs. It also enables the Group to extend the maturity of its debt while diversifying its sources of funding, by making its banking pool and its lenders more international. It gives the Group greater scope to pursue its diversification, both organically and through targeted acquisitions.


Increase in the group’s attractiveness

Top Employer certification: in early 2017, for the second consecutive year, AKKA Technologies received Top Employers certification, which recognises the world’s best companies in terms of HR practices, for France and Germany. Granted annually by Top Employers Institute following an independent evaluation of HR policies and practices, it rewards the Group’s ability to offer its teams a quality work environment, to promote the development of talent at all levels, and to improve its policies in favour of its employees. In addition to its recognition of the Group’s sound and powerful human resources policy, the distinction is a concrete illustration of the values that have guided the Group for over 30 years.

ISO/IEC certification: AKKA Technologies has obtained ISO/IEC 27001 certification in France. This international certification attests to the Group’s good practices and procedures in information system security, both internally and on behalf of its customers, in the fields of cyber security and the protection of their information.

- In 2016, the Group exceeded its revenue and margin targets for the third consecutive year.
- Its good performance puts it ahead of the targets contained in its 2018 strategic plan and lays the foundations for its future development.
- As such, the Board of Directors of AKKA Technologies, at its meeting of 21 March 2017, decided to propose to the Shareholders’ Meeting of 15 June 2017 the payment of a dividend of €0.60 per share (an increase of 20% compared with the dividend paid in 2016 in respect of 2015).

- 2017 will be a key milestone in our European balance and the progression of our strategic offerings.

- The Group anticipates strong revenue driven by the mobility sector. AKKA Technologies will also benefit from the integration of Erlkönig and GIGATRONIK, key player in the Internet of Things in Germany, and the two acquisitions announced in the life sciences in early February, namely CTP System and Edelway. In 2017, the Group will exceed the revenue target of €1.2 billion initially set for 2018.
- Against this backdrop, the Group is anticipating organic revenue growth in each of its three business units in 2017, combined with a further improvement in margins.

- The successful completion of the transformation in France, the diversification in Germany and the maintenance of high margins internationally leave the Group well placed to achieve its operating profit from ordinary activities* target of €100 million in 2018, with a margin between 8% and 10%. 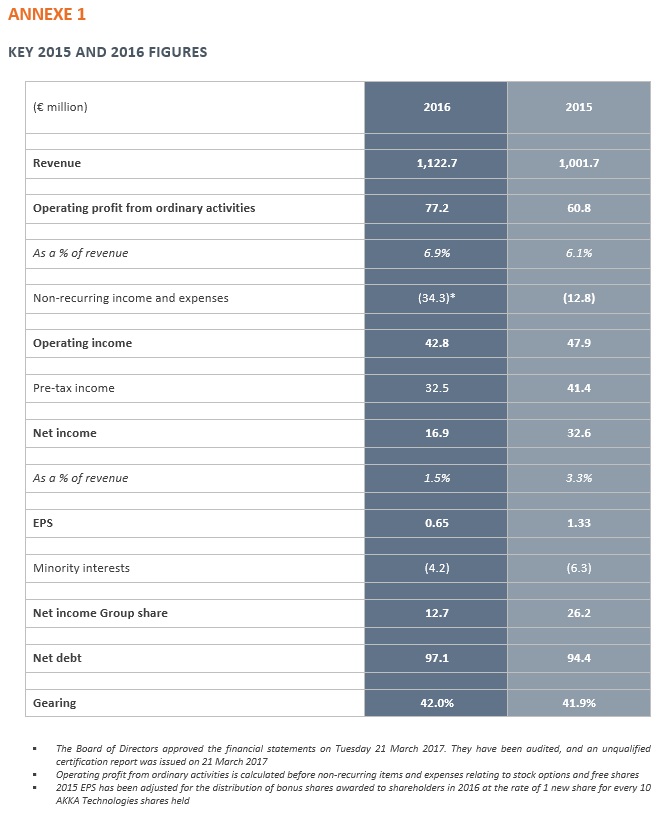 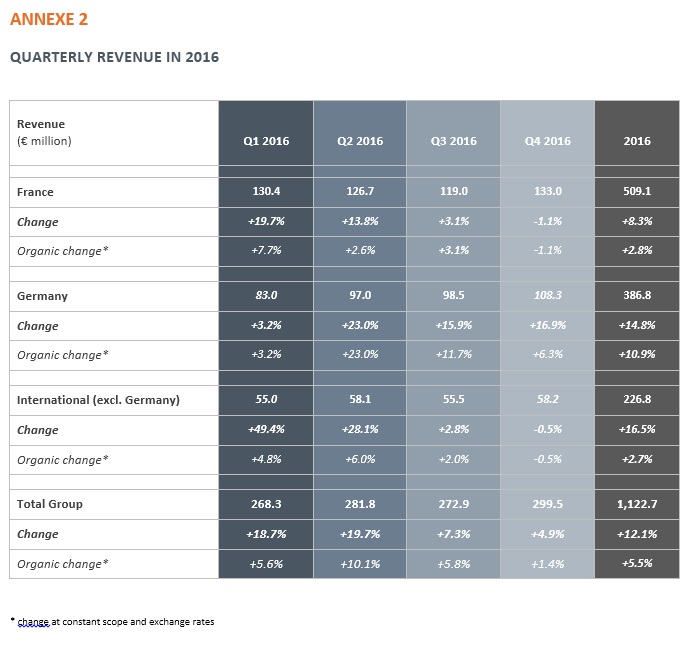 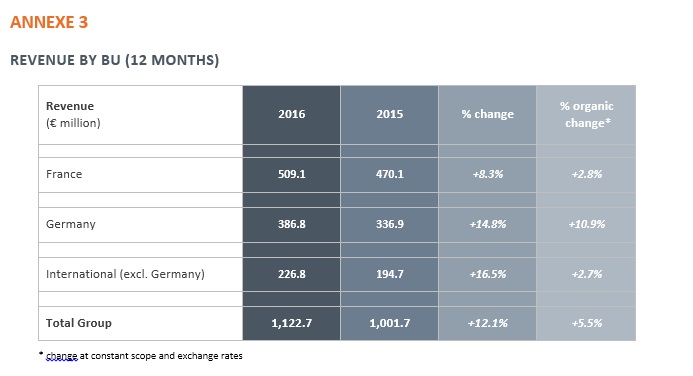 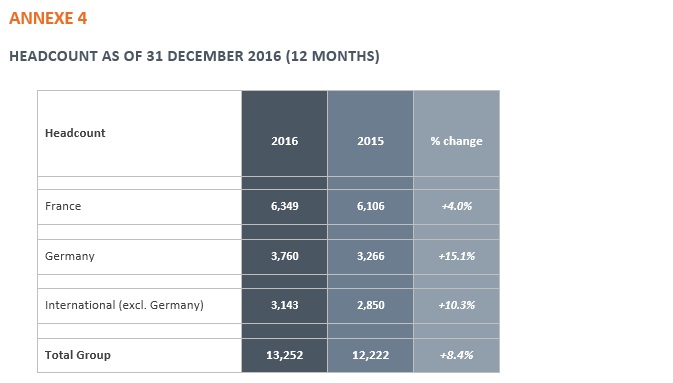 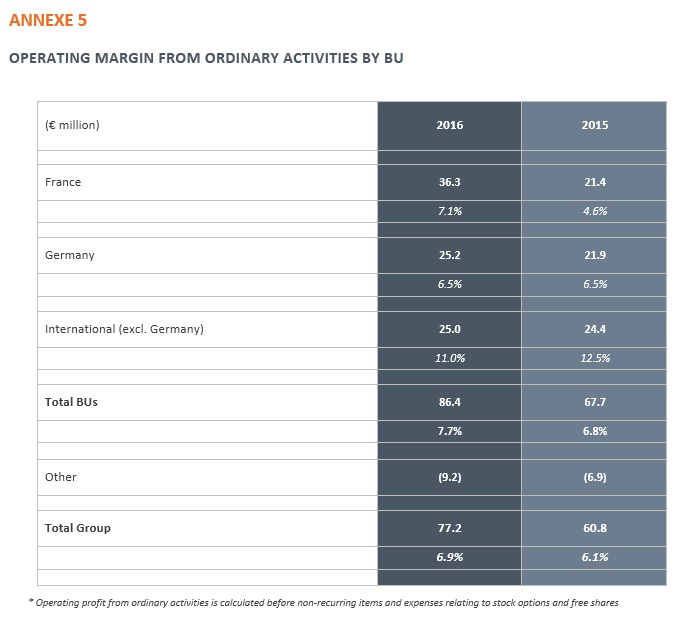